Chianina cattle originate from central Italy, their name comes from the Chiana Valley in Tuscany. It is one of the oldest and largest breeds of cattle in the world.

Chianina cattle feature in ancient Roman art sculptures and the breed is also mentioned in poetry dating back to around 50 A.D. Originally used as draught animals, Chianina are now mainly raised for beef – bistecca alla fiorentina is produced from its meat. This famous Tuscan steak is renowned for its tenderness and flavour.

Chianina bulls have been successfully used in crossbreeding.  They provide an outstanding growth rate in offspring and have been used to create breeds such as Chiangus,  (Chianina and Angus) Chiford, (Chianina and Hereford) and Chimaine (Chianina and Maine Anjou).

Today, Chianina cattle are still found in great numbers on the Italian plains.

Chianina have short hair which varies in colour from white to steel grey. Bulls and cows have black pigmented skin. This provides the breed with excellent resistance to eye cancer and pinkeye. They have short horns which start off black before getting paler as the animal matures.

The breed is known not only for its size but also its strength. Another defining characteristic is their well-defined muscling.  The shoulders, back and rear quarters are all well-formed.

Chianina cows can reach around 1,000 kilos in weight, mature bulls around 1,500 kilos. Although calves are quite large at around 50 kilos their small skull size means that calving is relatively easy. Young animals gain weight at a rate of around 2 kilos a day.

Chianina are hardy and well adapted to warmer climates and their tough skin provides excellent resistance to parasites.

Chianina cattle are usually slaughtered at 16-18 months. Carcass yields are around 65%.

In 2017 & 2021, cows.ie successfully sourced and delivered Chianina cattle to the Middle East. 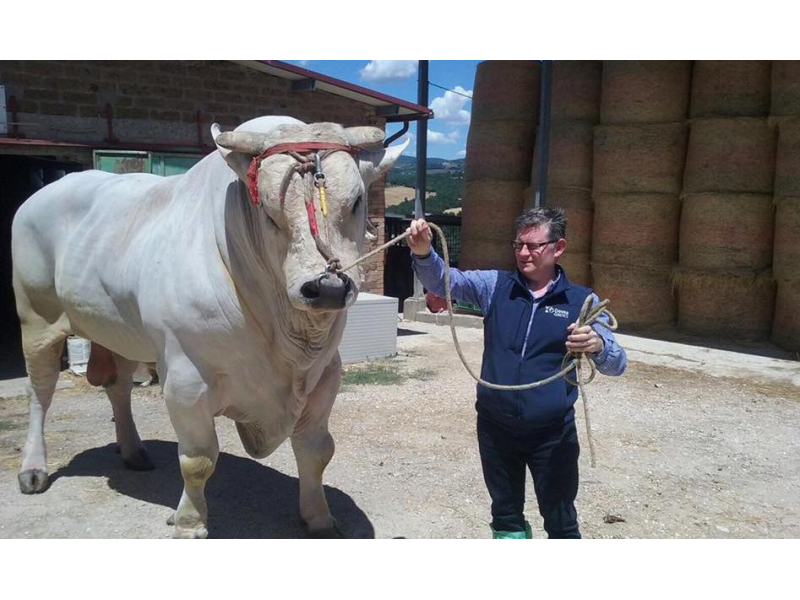